Photographer’s
Rights in the UK

Llandudno Photographic Society has a reputation for its friendliness, as well as its competitiveness. It is made up of a cross section of people from juniors, students, the unemployed, manual workers, white collar workers and retired folk.

Club members have other strings to their bows. We have authors, artists, geologists, pottery workers, rally drivers, mathematicians and hanglider pilots.

You don’t need to be a David Bailey to enjoy what the club has to offer. Whether you are a beginner to photography with a cheap compact, or a camera buff with a top of the range DSLR or medium format camera, the club caters for all.

Activities include talks from club members or invited lecturers – usually accompanied by some projected digital images. We also have competitions on set subjects and fixed subjects, where members can submit their work to be judged by outside judges who give constructive criticism – or praise – to each image. In this way, we learn what is good and what is not so good about our photography.

Meetings take place at Craig-y-Don Community Centre in Llandudno on Wednesdays at 7:15pm for a 7:30pm start. Our season runs from early September to early April each year. We close for the Summer. Newcomers are welcome.

The club was officially formed on Tuesday February 3rd 1981, by Gwyn Davies Williams of Penrhyn Bay, who had led a slight breakaway from another local camera club. This first meeting was held upstairs in Llandudno Public Library in Mostyn Street. At this meeting the club constitution was formalised. Among the eight people present were Gwyn’s wife Cicely, J. Baron Williams, his wife Pauline, Elwyn Sharps, Bob Cambridge, Dennis Meikle, and David Jones. 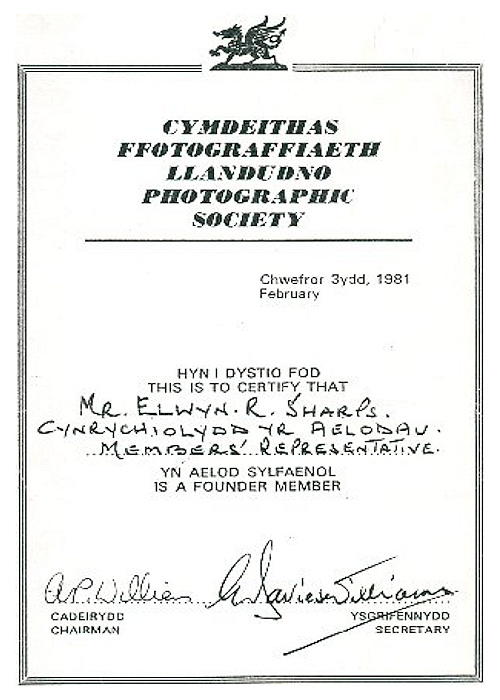 These eight founder members were given certificates to mark the occasion. This one is Elwyn Sharps.

Gwyn Williams was the first club secretary, J. Baron Williams the treasurer, and his wife Pauline the first chairperson. Arthur Lewis became our first new member a week later. The club closed for the summer in April 1981, and started again in September. From these very humble beginnings, the club has grown and prospered into the mighty bastion of photography that we know and love today.

We had always thought that ours was the first camera club in Llandudno. That is – until Gwyn Davies Williams told Peter Carlyon over the phone about a discovery that his wife Cicely had made in Llandudno Library. She was looking at an old book they were selling off : “The Life of George Crookshank” the artist. The book had a 1935 library label.

On the front cover was another label dated 1894. It said: “Llandudno Newsagents and Library, Amateur Photographic Society, note: 44 Mostyn Street.” 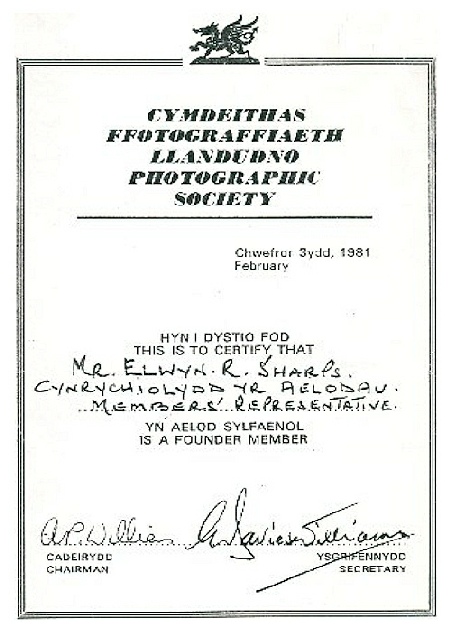